One hundred years since the roaring 1920s, Art Deco is still one of the most beloved design philosophies revered by architects, designers, and everyone in between. At its core, Art Deco philosophy rests on the intent to create a sleek and anti-traditional elegance symbolizing wealth and sophistication. So, when exploring design options for their next project, FIN developers Mike Ryan and Dale Crighton found inspiration in Deco’s elegance, luxury, and distinctiveness. With its long-term connection to the Caribbean, think South Beach or Havana, it felt like a most natural choice.

While developing their Art Deco-inspired residential project on the shores of Grand Cayman’s Capital George Town’s Harbour, they made a promise to each other and their buyers that whatever they bought for FIN, whatever they installed at FIN, must be of the highest quality and where possible, of genuine Art Deco. 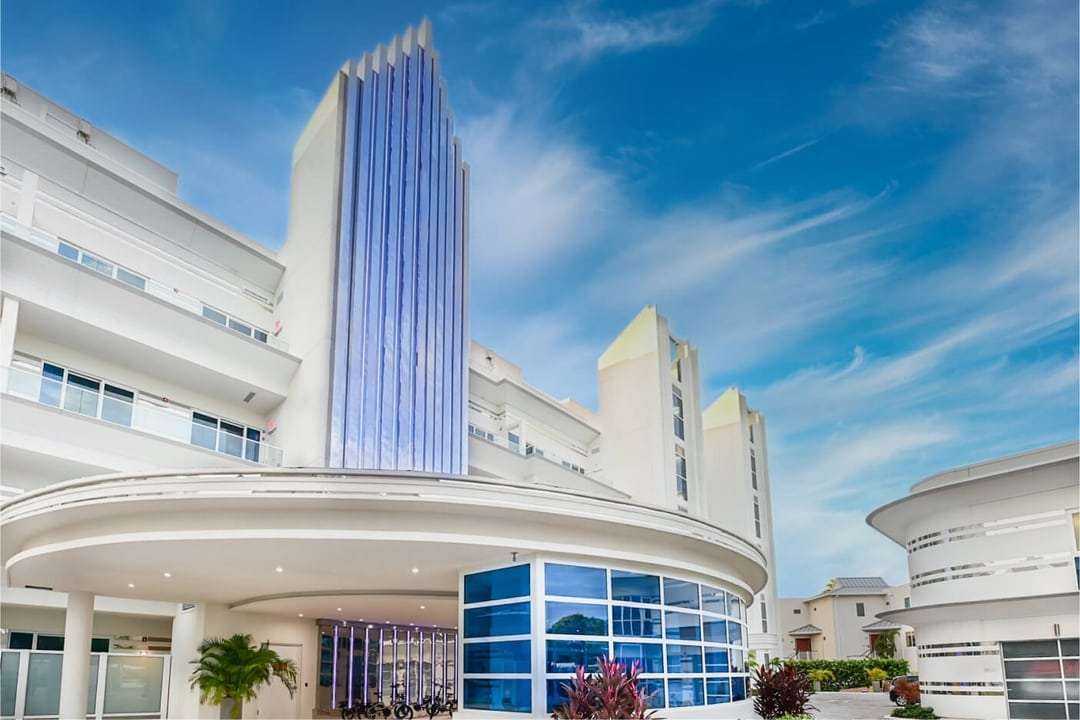 A World-Class Team for FIN

To achieve the highest standard of luxury living, they brought a team of the best in the world – SPAARC Architects, Linley, Mantis, ATM –  to deliver a streamlined Art Deco building, complete with chrome accents, geometric angles, and the typical curvatures expected in such a build. FIN’s team and specialist contractor, Gemstar, custom-designed, built, and installed the linear architectural details, such as the “fin”. The result is astonishing, pulling the eye north to south, making it appear like the building is in motion.

The team lived by FIN’s tagline: “The Last Word in Luxury” while designing, constructing, and delivering Grand Cayman’s newest and most luxurious address. Therefore, they incorporated materials that fit the Deco design into the architecture, such as marine grade polished stainless-steel bands wrapping effortlessly around the building, bespoke lighting design illuminating the intricate facade elements and bespoke entrances for every residential tower. They weighed and tested every aspect before purchase. If it didn’t have a luxury feel or weight to it, they rejected it.

A Deco property wouldn’t be complete without a show-stopping pool or two. There is something uniquely refreshing and indulgent about bathing in the faded grandeur of an Art Deco swimming pool. FIN’s pool and oceanfront saltwater lagoon are not of a typical Deco design. Their setting and ornamental accouterments evoke an unforgettable soak, especially once the sun has set and the lights illuminate the sleek lines metallic accents of the structure. 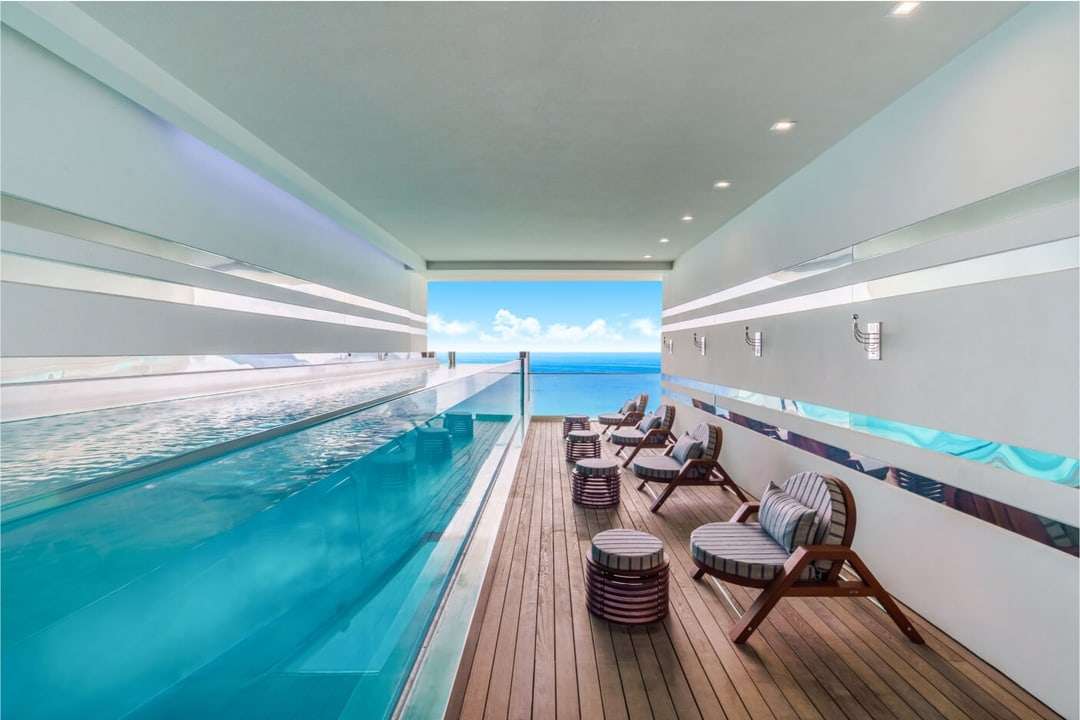 LUXURY IS IN EACH DETAIL

The developer duo insisted that the Deco design, with a modern twist, must be incorporated into the interior fit-outs. They added chrome and marble details in the primary bathrooms, creating decorative designs reminiscent of the Art Deco movement and combining with carefully selected fixtures provided by Kohler, Kallista, and Restoration Hardware. The result is an opulent Deco home, with the modern amenities expected in a luxury property.

FIN custom-designed the most significant design elements: the façade, common area doors, gates, railings, and elevator details. Then renowned artisans at Belt fabricated them. These critical design elements elevated the streamlined building to what the developer believes will be an iconic building for the region.

Ryan and Crighton wanted to create a 1920s club feel to the owner’s lounge in the common areas. Their team sourced unique, genuine 1920s pieces from around the globe, from the owners’ conference room table and chairs to the oceanfront lounge furnishings. The result is a luxurious, comfortable, and exclusive space for owners to gather and enjoy the ocean views from their private club-like lounge.

The developers’ involvement didn’t stop at architectural plans and specialty installations. Knowing the importance of the small details, they were intricately involved in the design process, selecting everything from door handles, light fixtures, and paint colors to the polished stainless steel linear drain covers, which were custom-made in Slovakia by LeCom Ltd. No decision was too small, and all worth the time and effort as they realized FIN, a new standard for the island that far surpassed what Mike Ryan had achieved with the development of The Ritz-Carlton Grand Cayman Resort and Residences and Dale Crighton with the successful development of the exclusive residential enclave, Crystal Harbour. 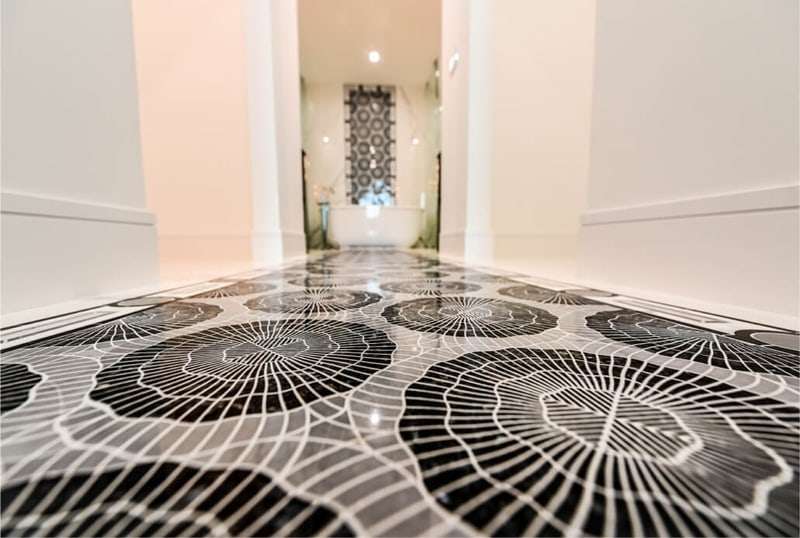 FIN is JUST THE BEGINING

The dedication to delivering on the promise of true quality and genuine grandeur never wavered despite the challenges brought on by COVID-19. Now that they completed the project and the owners are happily in residence, Mike Ryan and Dale Crighton are still working on ways to add to FIN and its service platform. Things like adding additional electric bikes to glide into nearby George Town or on-site wine tasting, specialist spa sessions, or on-property yoga courses. Their goal is to provide never-ending value to its owners and their guests.

After the tremendous success of FIN, Mike Ryan and Dale Crighton are partnering again on a project in Grand Cayman, Cayman Islands. The project, located in Crystal Harbour, will bring much-needed amenities to the exclusive neighborhood and celebrate the islands’ extraordinary diversity through its design and amenity offerings. The future project comprises 108 residences, a thoughtful mix of loft-style apartments, townhomes, and exclusive villas. It will surround a marine basin complemented by several food and beverage outlets, retail opportunities, and a luxury boutique hotel.